What You Should Know About Sending Money Abroad

Whether you hold a personal or business bank account, there may come a time when you need to transfer or “wire” funds to another person or entity in another country. For many, this can seem like an intimidating task, as you are entrusting that your money is being sent to another country, to end up safely in the intended recipient’s account abroad.  To ease that apprehension, let’s talk more about how an international wire transfer is processed.

A wire transfer is a way of sending money from one person or entity to another, where the funds are moved electronically from the sender’s bank account to the beneficiary’s (i.e. receiver’s) bank account. The term “wire” is a throwback to the days when telegraph wires were used to communicate the transfer of funds between banks and other financial institutions on behalf of their respective account holders.

In the case of the United States, banks and other financial institutions use either of two methods for sending funds: FedWire or SWIFT. A FedWire, operated by the United States Federal Reserve, is used to transfer U.S. dollars both domestically and internationally, where SWIFT (Society for Worldwide Interbank Financial Telecommunications) is commonly used to communicate the transfer of U.S. funds and most commonly traded foreign currencies around the world. 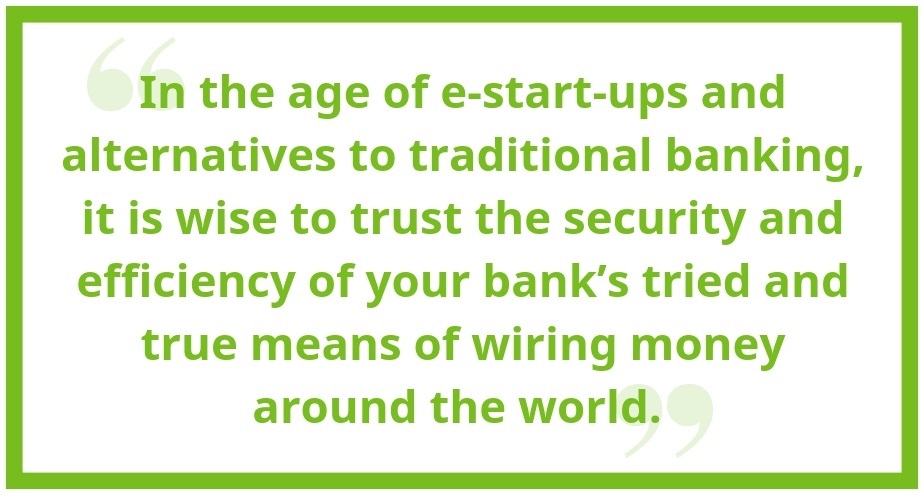 How is the Money Sent?

Contrary to what many envision as bags of cash being couriered around the globe to make good on a transfer of funds, the reality is that both domestic and international wire transfers are “settled” using a ledger account system of debiting and crediting between banks and their correspondent banks here and abroad. A correspondent bank is a bank that performs financial undertakings on your bank’s behalf, where there is a formal relationship between the banks. These relationships play an important role, especially internationally, as the correspondent banks act on your bank’s behalf overseas.

Because the U.S. dollar is generally accepted as the dominant trade currency worldwide, many international wires are sent in U.S. dollar payments and are either held in or “settled” in a U.S. dollar account abroad. If you are sending U.S. dollars to be deposited in a U.S. dollar account overseas, it is important to inform your bank of this detail in order to avoid any additional fees or foreign exchange loss that might occur when an intermediary or correspondent bank unnecessarily converts the funds to the currency of the beneficiary’s country. Alternatively, if you are sending a payment for something that has been invoiced in another currency, the U.S. dollar equivalent can be converted to the foreign currency using a current market foreign exchange rate, and sent as a wire in the foreign currency. The reverse is true if you are receiving a payment in a foreign currency, where you would end up with U.S. dollars being deposited into your account here in the U.S.

In the age of e-start-ups and alternatives to traditional banking, it is wise to trust the security and efficiency of your bank’s tried and true means of wiring money around the world. The highly secure SWIFT system and the extensive network of your bank’s correspondent banking relationships help keep the process of sending your money safe and efficient.

Kevin Tiernan serves as VP, Treasury Management/Global Banking Sales Manager at Bankers Trust. He has nearly 15 years of banking experience in treasury management and retail banking. After earning his bachelor’s degree from Iowa State University, Kevin went on to earn his MBA from the University of Iowa. He also completed the Graduate School of Banking program at University of Wisconsin. Prior to joining Bankers Trust in 2011, Kevin worked at Wells Fargo for four years. Kevin has been recognized for his involvement in the community and career achievements. Most recently, he was recognized in the Business Record’s Forty Under Forty in 2015. He was also recognized as an Up and Coming Banker in 2014 by Community Bankers of Iowa, and he received the Governor’s Volunteer award in 2012. Apart from his position with Bankers Trust, Kevin serves on the board of directors of Balance Autism – an organization that provides care and innovative therapy for those living with autism. In his free time, Kevin likes to travel, attend live music concerts and festivals, and ride his bike on Iowa’s beautiful trails.

5 Reasons Your Business Should Use P-Cards

Have the Education Center delivered right to your inbox